For those of you out there that have played any of Telltale’s episodic adventures like The Walking Dead, have you ever thought “I wish I could go back and change that last decision”? Well, it seems developer Dontnod Entertainment were thinking just that when creating their new title Life is Strange.

Life is Strange is the French studio’s second game, the first being 2013’s Remember Me. This time rather than making an action adventure game set in a futuristic Paris, they have stripped away all combat and picked a setting halfway round the world in a modern day America. The game is what’s best described as a graphic adventure (more interactive TV show than video game). You play as Maxine Caulfield, a high school senior who has moved back to her home town to study photography at the prestigious Blackwell Academy. While there she makes new friends, new enemies and reunites with people from her past.

The game plays incredibly similar to The Walking Dead. You have a set of enclosed environments to explore, each with characters to talk to and objects to interact with. These people and props are pointed out with sketch book style annotation telling you what they are, and when you get close enough, the different ways you can interact with them. Unlike Telltale’s games, the camera is situated behind the protagonist and is controlled using the Right stick. This makes it much easier to explore you’re surroundings.

During conversations you are given different options of what to say. These choices impact how characters think of you and how the story progresses. Oh, and the time travel…did I forget to mention the time travel?

After a traumatic event early in the game, Max learns she has the ability to reverse time. It’s never explained exactly how or why she has these powers, but for the most part they implemented in conversations. After talking with someone, if you’re not quite happy how it turned out, you can reverse time to change your actions. It can also be used to gain information to help you progress. For example, in class you don’t know the answer to a question. By reversing time after someone else gives the correct answer you can can escape embarrassment and earn some brownie points with your teacher (don’t worry, this particular student deserved to have her thunder stolen).

Max’s time reversal skills don’t feel like they’re used as well as they could be. I’m assuming (or at least hoping) that as the story progresses in future episodes Max learns more about her powers, and you’ll get to do more with them. But for the most part it works well and is an interesting way to experiment with the choices you make. 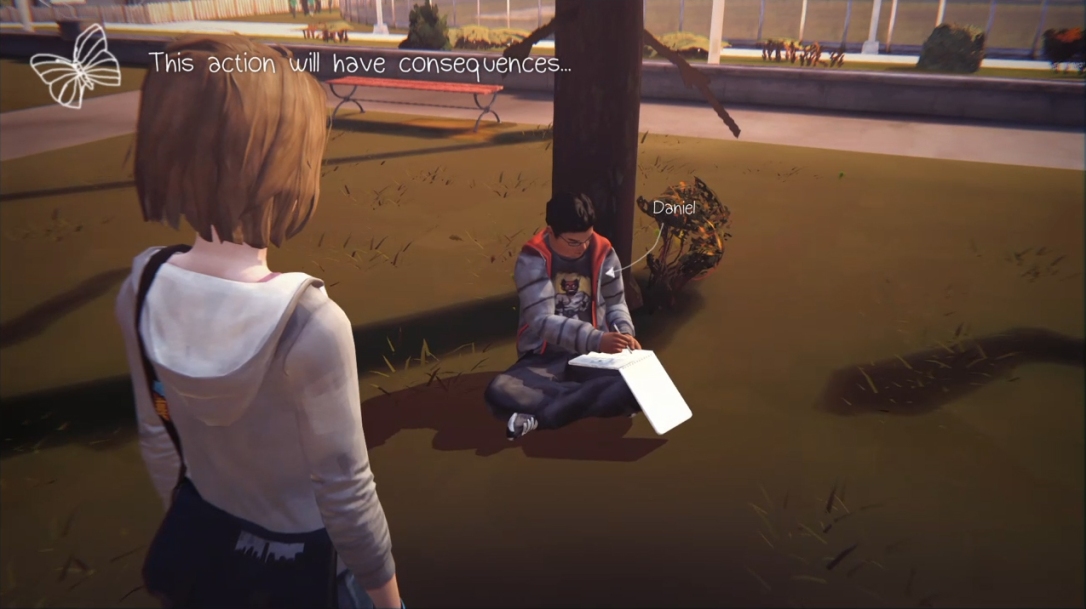 A consistent theme throughout is the butterfly effect. The idea that a small action can have major unforeseen ramifications in the future. When you have a conversation and choices were made, it will say afterwards “This action will have consequences…”. The line is accompanied by a sketch of a butterfly, just one of a few ways this imagery pops up throughout the episode.

The choices in the game are separated into big and small and there are four big decisions in the first episode. When these big ones happen Max questions whether it was the right thing to do and points out that you could go back and change it. The great thing with these situations is, it never feels like either option is the “right” way to go. Each has its own merits and faults, and feels like it could have far reaching consequences in episodes to come. But with this, most of your actions don’t have much of an immediate effect, so it’s hard to know for sure at this point how much of an impact they will have in the end.

The game was developed using a modified version of Unreal Engine 3 and looks like a slightly caricatured version of reality. Graphically it’s not pushing any boundaries, but with the exception of some texture pop in, it runs smoothly. The textures of the characters and the environment have a nice hand painted look to them and the world is littered with small details and items to find. There are notices and posters everywhere giving you more information about the world and the characters around you, such as the sinister sounding “Vortex Club” and posters for a missing girl. There are also various points in the game where Max can take optional photographs. These photos are the one collectible in the game, and the developers have included a handy way to go back and get ones you’ve missed. In the main menu you can choose to re-play levels in a few different ways including collectible mode so you’re choices aren’t saved, only your photos.

As I touched on earlier, the interface has a nice sketchbook feel to it which carries over to the menus. By pressing the touchpad you open Max’s Journal where the team have done a nice bit of world building. You can read diary entries for the events that have happened during the episode, as well as a few pages leading up to them. There are also pages about a few characters written by Max and a place to see photos she has taken. Maxine’s smartphone can also be accessed from this menu where you will get text messages every now and then. 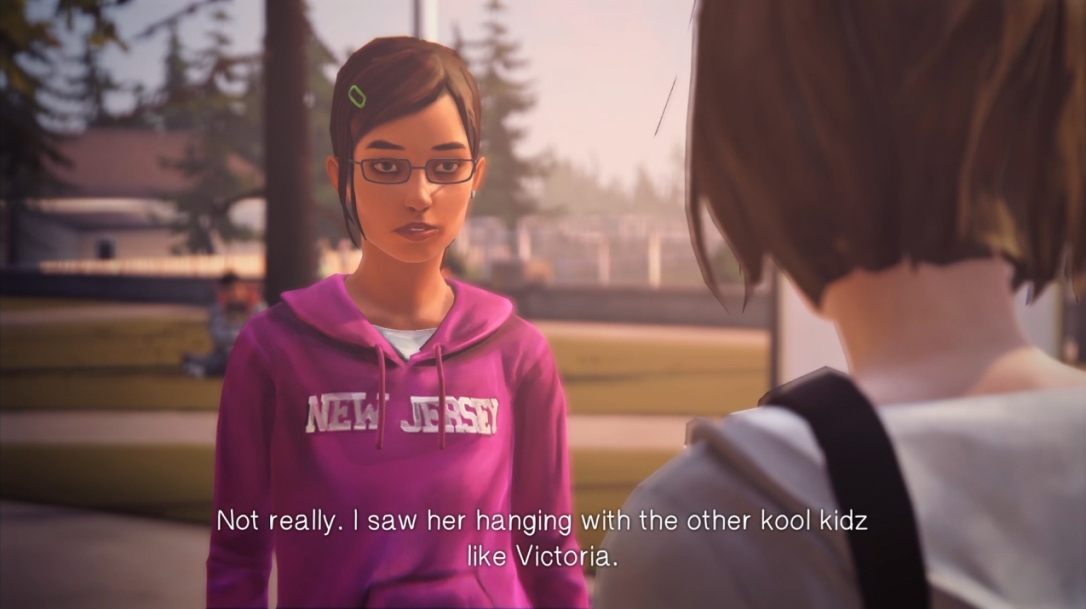 The missing girl I mentioned earlier is Rachel Amber. The mystery of her current whereabouts is a thread throughout the episode, and I expect a major part of the story going forward. With the exception of episode bookends hinting at something more epic, the story overall feels like something out of a teen drama. Think The O.C but with a bit more of an indie feel. The soundtrack is suitably fitting for the story and setting. It’s all indie rock and folk music and works really well with the visual style. Crosses by José González being a song of note.

Our main character is interesting and likeable, but the supporting cast feel like they’re from a list of high school stereotypes with dialogue that doesn’t exactly help matters. There are moments when the use of “slang” feels very unnatural and forced. The individual that’s probably most damaged by this is an old friend of Maxine’s. You really feel for her situation and what she’s had to go through, but after hearing her say “hella” one too many times you’re really pulled out of it. The game reminds you way too often that these are adults doing impressions of teenagers (a particular moment in Friends comes to mind). There is even a moment where the subtitles get in on the action, maybe trying to add a bit more “street cred” to otherwise regular conversation. Unfortunately, Maxine isn’t immune to this bad writing, but comes away from it better than most.

On top of the dialogue issues, the game also has some problems with lip sync, or lack thereof. For a game where you spend the majority of your time in conversation, looking at close ups of characters faces, it’s very distracting to see their mouths randomly flapping without regard for the associated sounds. I can imagine part of this is so they don’t have to re-animate the lips for different languages. But they could have at least spent the time to get the English right, considering it’s the language of the game’s setting.

With Life is Strange Episode 1, Dontnod has started things off fairly strong but the future feels uncertain. So much of what you do in the episode seems like set up for what’s to come. And with the next chapter releasing sometime in March, it will be a while before we find out. The soundtrack and visual style are really fitting for its Indie film inspirations, and it’s nice to play a Telltale style game without technical problems. But, despite how painful the dialogue can be at times, I like these characters, and I’m looking forward to seeing how the story progresses and where it takes them.