After a couple of action orientated instalments in the franchise, Resident Evil Revelations on the 3Ds (and later PC, 360, PS3 & Wii U) was a breath of fresh air for fans of the classic Survival Horror games. Now, Capcom are doing a sequel in the form of the episodic Resident Evil Revelations 2. The game consists of 4 episodes that will be released weekly starting February 25th, culminating in a retail version of the whole thing on March 20th. Earlier this week I got the opportunity to go hands on with a section of Episode 1 on PS4 ahead of its release next month. 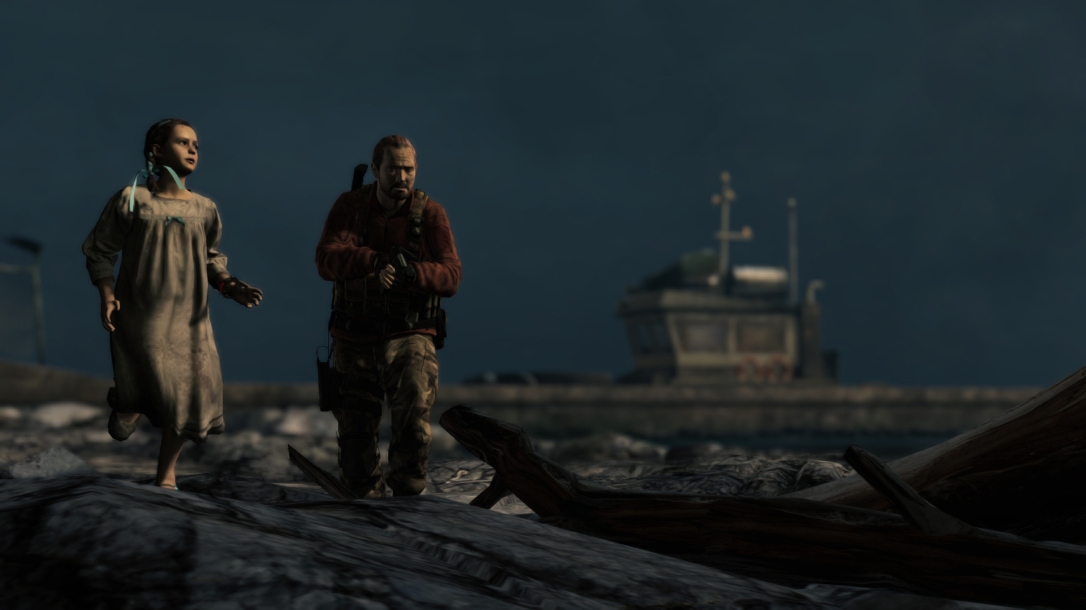 As with most Resident Evil (RE) games, you can play as multiple characters, each with their own campaign. For this demo I was given control of Barry Burton, someone that hasn’t been playable in the main story since the original game (unless you count the re-makes). The game opens with a CGI cutscene of Barry on a boat headed to a mysterious Island. He’s listening to a recording of a distress call from one Moyra Burton (Barry’s daughter). Once on the dock you meet a little girl (also mysterious). You are given no explanation of who she is, but she refuses to stay behind with the boat and tags along with Barry for the adventure.

My destination is a radio tower in the distance,  so I set off to find a route up the cliffs. If you’ve played any Resident Evil game since 4 or 5 then you would have an idea of how it controls. Hold Cross to sprint, press L2 to pull out your equipped gun and aim, press R2 while aiming to shoot, and pressing R2 without aiming gives you a swift knife slash. Other than the knife, Barry is equipped with a pistol, an Assault Rife and a powerful revolver, the latter of the two I mostly  left for special occasions. On my way up the cliffs I encountered the first of three enemy types in the demo, a kind of large crab/lobster/insect hybrid. Groups of them came at me but were quickly dispatched with a bit of knife action.

It’s not long before I come across a creepy building I have to go through, which I dutifully enter and find my first green herb, a health item used in every RE game.

green herb, a health item used in every RE game. Judging from the décor I assume the place is some kind of abandoned prison, and it’s not long before I come across some of its past inhabitants and the second enemy type, Zombies. Or rather, zombie like monsters called “The Rotten”. The girl proclaims *Gasp* “the Monsters.”, to which Barry replies, “Monsters!?!” ( I can already tell the dialogue is sticking to its wonderfully cheesy roots). A few headshots with my pistol takes one of these chaps out, or a single headshot and a button prompted melee hit (just as satisfying as RE4).

Soon after this encounter the girl proclaims that she can sense monsters, at which point you are prompted to press Triangle and switch to controlling the girl. While playing as the girl you can see enemies through walls as a person shaped cloud of green smoke. The range of this sense extends when she is crouching (by pressing in the left stick), she can also see hidden items as glints of light and point them out to Barry using L2.

Using her special sense you find an enemy that is unaware, then switch back to Barry and take it out with a stealth kill. This two character dynamic is interesting, but I wonder how much it will take away from the tension of entering a room and not knowing what’s on the other side of the door.

What follows is a maze like puzzle as I find my way through the prison, past enemies and traps until finally emerging on the other side. My story play-through ended with a mini boss fight of sorts. I entered a log cabin and fought a creature that seemed more like something out of Silent Hill than Resident Evil. RE enemies are normally either of the zombie variety, or some kind of mutated creature, but this guy seemed more like Frankenstein’s monster gone wrong. He was obviously made up of different people, with an extra arm sticking out of his back, and a metal spike where his right hand should be.

Next up I got to play some of the new Raid Mode, which is a new version of Mercenaries. I could play as either Barry or Claire Redfield (the main character for the story mode) in what are essentially survival matches against various enemy types. In the maps I played, I fought off waves of enemies and moved onto new areas after killing a certain amount, until finally unlocking the level exit which took the form of a giant floating coin that I had to punch to finish. 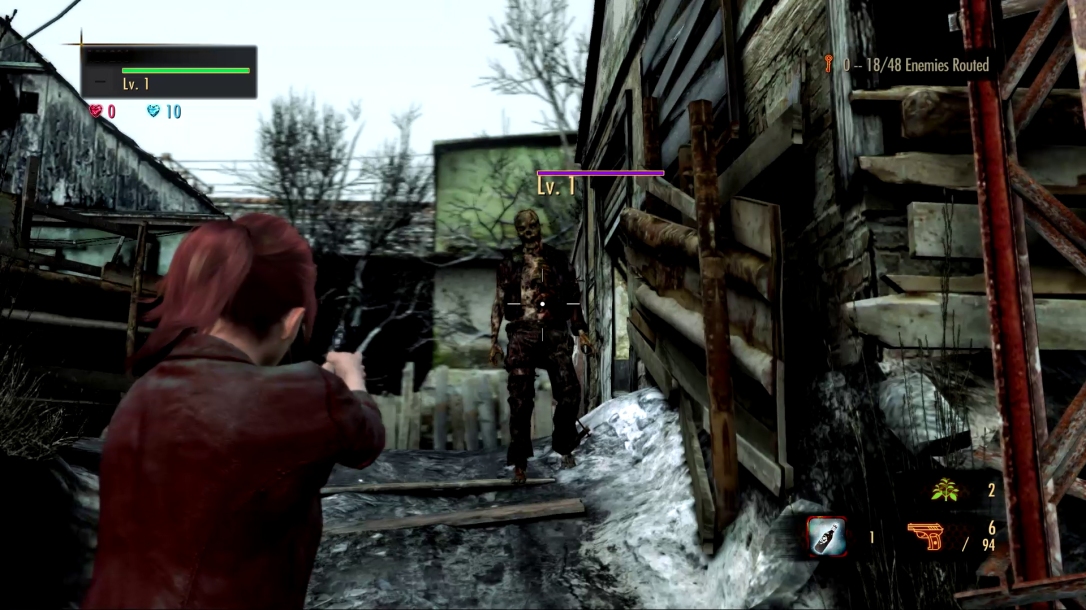 You unlock new weapons by finding them in chests in the maps which you then unlock with in game money. You and your enemies also have levels. What level you are changes how much damage you can do and how much you can take. Each map you play has 5 medals you can earn, each for completing a task like finishing quickly, killing every enemy rather than the minimum to finish, and playing the map at the same level as the enemies. I’m not sure Raid is as good as Mercenaries, but it was still fun, and I can imagine myself spending hours trying to unlock all the weapons and medals in the game. 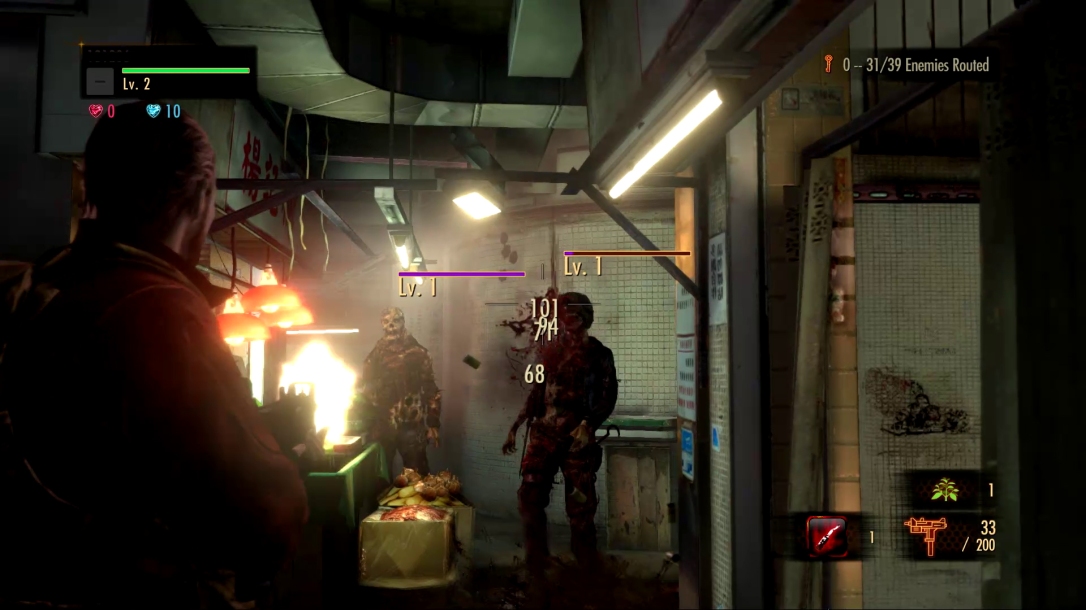 While it wasn’t something I noticed that much in the story, when playing the more fast passed Raid Mode I found the aiming to be a bit finicky. Trying to aim precisely ended up being a bit of a pain as the cross-hairs would either move very slowly or jump half way across the screen. This could be something that is fixed before release but I thought was still worth mentioning.

As I said earlier, my play-through was on PlayStation 4, and graphically the game looks like a PS3/360 game that’s been ported to Next-Gen, which make sense as it’s coming out on both generations on consoles. The characters themselves look fine but nothing beyond what I’d expect from the last-Gen version. The environments on the other hand leave something to be desired though. The lighting is good and atmospheric, there’s plenty of grass in exterior environments, but even though the textures are quite high resolution, the distinct lack of bump maps makes everything look rather flat and dated. But considering the season pass for all 4 episodes will only be £19.99, I wouldn’t of expected it to be up for best graphics at the next Game Awards. 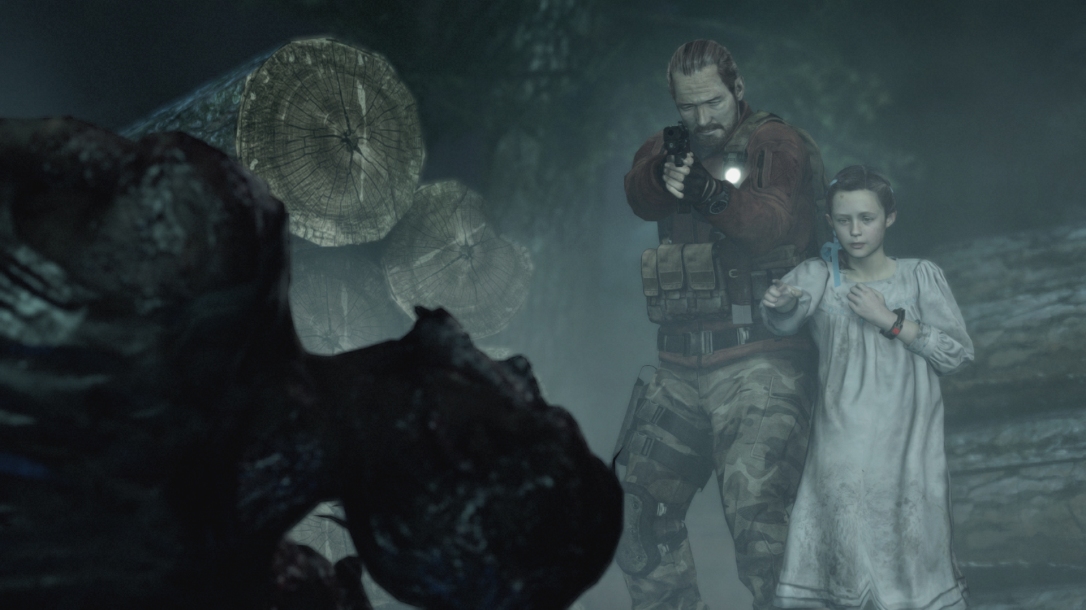 I’m not sure how long the full episode will be, I played it for over an hour and would assume I was at least half of the way through, which is a decent amount of content for the price. The point is, I want to play more. While it isn’t without its flaws (I’m not totally convinced by the need to have an A.I partner) the story felt as if it could have been a section from RE4, and the Raid mode was enough fun for return visits. I’m looking forward to getting to grips with the rest of the game to see if it can adequately build on what it’s started here.