Since it’s announcement in September 2013 alongside Child of Light, Valiant Hearts: The Great War has been a very prominent blip on my gaming radar, but for some reason I had never got round to playing it (something about steam sales lowering how much a game is worth to me when bought digitally). A few weeks ago it was on sale on the PSN store, at which point I couldn’t think of any reason not to buy it immediately.

Made as part of Ubisoft’s Internal Entrepreneurial Initiative (total tongue twister), Valiant Hearts is a puzzle adventure game developed at Ubisoft Montpellier. It is set during World War 1, also known as ‘The Great War’. During the three year period depicted in the game you switch between a group of four characters who’s lives cross paths throughout the war. There is Karl, a German Soldier with a French wife and newborn son he was forced to abandon. His father-in-law Emile, drafted in the French army soon after Karl’s deportation. Freddie, an American who volunteered in the French army. And last but not least, Anna, a veterinary student searching for her father, who is being forced to make war machines for the Germans. They are all joined at one point or another by Walt, a very well trained German medic dog.

Other than traversing the environment, throwing items and flipping switches, each character has a unique ability to get them through their journey. Emile can dig his way through pre-determined spots with his trusty ladle. Freddie can cut through barbed wire with his own special chain cutters, clearing the way for the forward advance. He also seems to be quite the powerhouse, literally punching his way through metal and stone barricades. Karl likes to play dress up, and will regularly change uniform to sneak in and out of restricted areas.

Anna though has probably the most elaborate ability. With her skills as a vet she can fix up wounded soldiers she comes across (because doctors are just people vets right?). This works in the form of a mini game. You see a bloodied bandage across the top of the screen, and in almost Rock Band manner, are asked to press a series of buttons timed with blips from a heart monitor. The more successful hits the cleaner the bandage gets, keep failing and the patient ‘bleeds out’. All of these parts have a pre-determined length, so you just have to make sure you don’t loose your patient before the end.

Walt the dog can help out each of our heroes with a variety of skills. He can be instructed to fetch items, drag casualties away from danger, distract guards and even flip switches. He also has the power to be undeniably cute. He’s so adorable it almost hurts, especially when you take an item from him and he is rewarded with a belly rub or a scratch behind the ears. You don’t start the game with Walt, but when a section crops up without your furry companion, it does feel somewhat lonelier without him.

Out of all the characters you play as, Freddie is the one that doesn’t quite fit in. Yes, American soldiers did volunteer before the U.S officially joined the fight (28 of them to be exact), but Freddie just feels too over the top at times. It’s as if he was designed to be a more traditional video game hero to appeal to the masses. Sometimes it seems he wouldn’t be that out of place in the cast of The Expendables. And if action films have taught me anything it’s that a hero always needs a villain. In this case it’s the somehow even more pantomime Baron Von Dorf. Regularly seen drinking an evil glass of wine, as he flies away in his evil Zeppelin wearing an evil hat (Although apparently the hat is accurate). Every time he comes on screen he manages to make everything around him a bit sillier by association. When these two heavy hitters get together it gets even more ridiculous, their conflict concluding with a boss fight reminiscent of something out of Metal Gear Solid, not a series exactly known for it’s subtlety.

The levels are always one of three types. They mostly work like more traditional side scrolling games, working your way from A to B with a series of obstacles in your way to overcome. Then there are levels set in a closed area to explore, such as a town or military base. In these you will have to find characters with tasks to complete, helping you progress. They have been designed in a way where one task will flow to another which keeps the momentum and stops you from feeling like you’re just wandering around aimlessly. With the exception of narration between levels, characters don’t really talk much in the game, they mostly speak gibberish (there are even people credited with being the gibberish voices for particular languages). Instead instructions are given in the form of images in speech bubbles. This is fitting with how the rest of the game tells it’s moment to moment story with imagery rather than words.

The last level type is a vehicle section. The camera is facing the characters as the scenery scrolls past, the only movement is side to side and you must use this to doge obstacles such as land mines and falling bombs. The brilliant thing about these levels is that everything is timed to music. Each section uses a piece of classical music and times all of the action with the beats of the song. These levels really help mix things up and are one of my favourite parts of the game. Speaking of music, the soundtrack is wonderful. It’s all inspired by the era and is excellently composed. I find myself leaving the game running on the main menu so I can listen to the games’ theme Little Trinketry on repeat.

The game was originally born from sketches drawn by Art Director Paul Tumelaire. This is rather fitting as it was the art style that initially grabbed my attention. The game looks beautiful. Thanks to the Ubiart Engine, every part of the characters and the environments are hand drawn and all the better for it. Tumelaire’s distinct style somehow manages to be both caricatured and sombre. Delivering the gravitas necessary to be taken seriously, while still bold enough to fit the game’s more over the top moments (Baron Von Dorf, I’m looking at you). There are some fantastic uses of  lighting in the level design. One night-time level has you sneaking through fields while soldiers try to hunt you down, flares periodically illuminating you and your pursuers. Depth is also used really well. Many of the levels fill the background and foreground with animation. Sometimes you are even switching back and forth between different planes, or sending Walt into the background to fetch an item.

Unfortunately, the puzzles in the game hold one of it’s few flaws, it’s all a bit on the easy side. I think the longest I was ever stuck on a puzzle was about 30 seconds. So for anyone looking for a challenge, this will probably be a big negative. But for me the journey was so well crafted that I didn’t mind.

As you would expect with an Ubisoft game, there are a variety of collectables in each level. But in this case they are actually worth finding, even for those people not concerned with trophies or achievements. All of the items you find are like parts of a museum exhibit, each accompanied with a piece of information. In addition to the found artefacts, there are also other historical facts relating to the level you are playing that pop up from time to time. Being historically accurate was obviously very important to the team and the result is a game that has taught me more about the First world War than I ever learned in school. Even our 4 heroes, while they may be fictional, are based on stories of real people during the war. 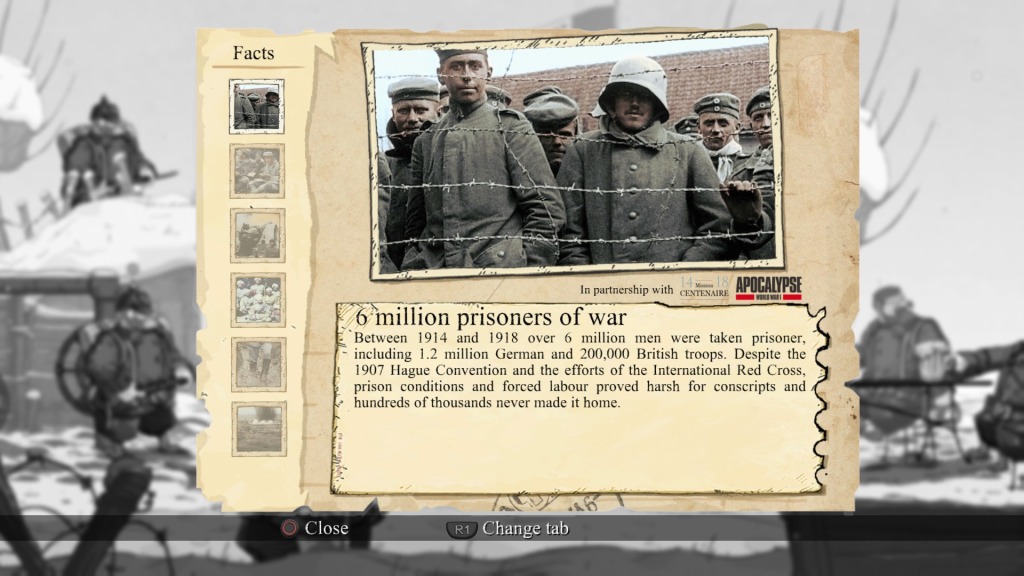 Valiant Hearts is a fantastic experience and one well worth exploring for yourself. Some gamers may be put off by the lower difficulty level, and sometimes the tone feels a bit bipolar. But none the less it is a journey worth taking and one I highly recommend. It’s one of the most engaging and enjoyable history lessons I’ve ever had.